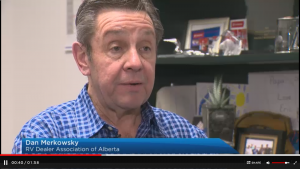 WATCH ABOVE: After some challenging years, the recreation industry in Alberta is experiencing a resurgence. As Sarah Kraus explains, RV shows across the province are drawing big crowds and industry insiders say it’s a sign of a rebounding economy.

After a few challenging years, the Recreational Vehicle Dealers’ Association of Alberta says sales of holiday trailers are up significantly across the province.

RV shows in Edmonton and Calgary drew large crowds — 27,000 people each — and sales were up as much as 40 per cent compared to 2016. The numbers surprised inustry insiders.

“We thought we’d have nobody show up at the end of the day,” executive vice president Dan Merkowsky said.

He believes the value of the Canadian dollar is impacting people’s travel destinations.

“Instead of going to Hawaii for a week or Mexico for a week with their friends or family, they’ve decided they want to spend more time with them here,” he said.

“In Calgary we had one coach that sold for $550,000 and that person paid cash for it,” Merkowsky said. “What we heard is that person had a property in the States, sold it at a great profit and wanted to reinvest.”

Merkowsky believes Albertans are tired of waiting to go on a holiday.

That’s certainly true for Wuanita Bastell, who drove down from Ponoka with her mom to look at the trailers at the Red Deer RV show Saturday.

“This will probably be our first time going on a holiday in two years,” said the mother of five.

Bastell works in the oil and gas industry and for the last few years, she felt uncertain about her job and focused on paying down debts.

“It’s been a little scary, but I can see the light coming on,” she said. Now she’s looking to make an investment for her family’s future.

“We want to find something that will allow us to travel, have some fun with our kids and not be too costly,” she said.

“It’s not just an investment in one trip. It’s an investment in many, many trips over the life cycle of your RV purchase,” he said. “If you have it for five to six years, you sell it – you still get some money back. Unlike that trip to Mexico, when you come back it’s all gone already.”

Short said RVs can start at under $20,000. In the last few months, he’s been overrun by customers — especially at the Edmonton RV show.

“Way more customers than sales people. We had six, we could’ve used 12!” he laughed.

To keep up with demand, they’re hiring four new staff and expanding their business. 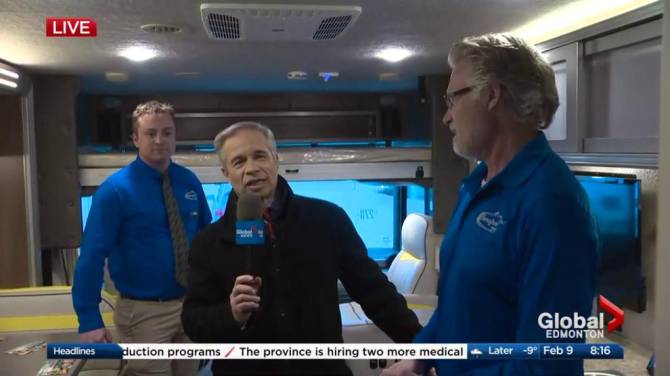 WATCH ABOVE: The folks from the Edmonton RV Expo brought a motorhome to the Global Edmonton studio to show off what was available at the show. (Feb. 9, 2017)

“We’re building a new store over on Anthony Henday and Ray Gibbon Drive, now that the economy’s getting better and things really started to turn around for us.”

He thinks the RV industry is seeing a change in Alberta’s economy.

Bastell said that rings true for her family.

“I have a little more freedom to spend now, because I’m not as afraid that ‘oompf, it’s all going to fall apart on us,’” she said.

Plus, she wants her children to explore Western Canada.

“We have the mountains, we have the lakes, we have West Edmonton mall, the Calgary stampede, Calaway Park and the camper will get you there without spending an exorbitant amount of money. If we want to go somewhere exotic, we’ll go to B.C. or Saskatchewan.”

With files from Margeaux Morin